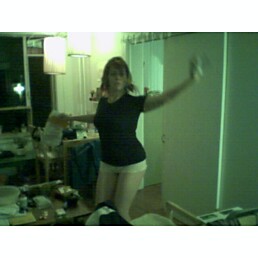 Crystal French is the swingingest
She's also a genius
working like sisyphus
on her dissertation
there's a beast known as "Xiphius"
who's also called cetacean
the lower jaw of his genus
has two tusklike teeth like two weenus
no teeth in his upper jaw
this would be an interesting footnote
for any dissertation
Crystal French is a hot genius
many people in Academe are cetaceans
who torture her by living in the past! 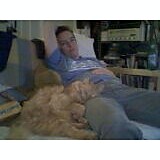 Here are the beer choads
beer contains yeast
the love so hard overflowed
that the, um
The man merged with his beast
who is named Sheldon 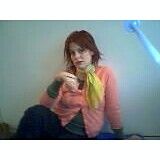 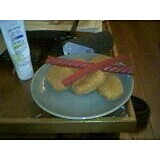 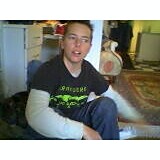 Apparently my grandmother, Pauline, had a Yiddish expression that basically went, "S/he's farting with fire." In the old country this was the equivalent to shitting bricks.
Today I woke up with bad gas. I thought the people should know. Inspired by dubz, I went and had an x-ray this morning at the walk-in clinic. 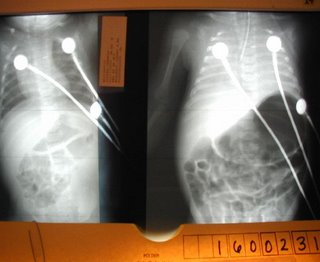 Bloated, much?
Perhaps it was my late night dinner consisting of bean tacos (3) and red wine (2 lil' glasses.) It seemed like a good idea at the time.
I had another, adoptive, grandma named Eda. She was really sensitive to the odors of the world. One time a certain person was at Eda's house with bad farts. (Not me.) Eda said, "What did you eat for lunch?" And the person said, "A burrito." And Eda said, "What was in that burrito, dynamite?"

*thanks to Sean Griffin

Surfed for 3 hours with Kara Lynch, an original Team Shredder member who now lives in Massachusetts, but who still visits the Team from time to time. meet me in Okemah is a project she did, and Black Russians is another, btw.
Jenny D came all the way up from Tijuana to say hi. Somebody got her party on the night before, though, until 5 am, and I think she was a little too under the weather to surf. Jenny D and Kara are both part of La Linea, also based in TJ.

l to r: Margarita, Jenny, Kara, Abril, Amaranta, and someone unknown to me (I'm sorry!)
They are a great writing/art/performance group.


Anyway, yeah, so The Mrs. came home recently with a really cute & unavoidably choady surfer magazine for me. We laughed at it and then I've since been reading it cover to cover. It has a list of "69 things you gotta do before you die, brah," which contains all kinds of choadishly predictable things, like "camp on the beach," "get barelled," "get a noseride," and my fave, "become a Dude temporarily," which basically says, don't bathe for a week, scratch your stomach under your shirt, and call your wife bro. Another item on the choad living the dream list is "surf with a legend," which is what Kara and I ended up doing. While sitting on our boards wondering where the good waves went, I turned to an older gent and almost said, "You look like Mike Doyle." But I didn't. But then I realized he really was. 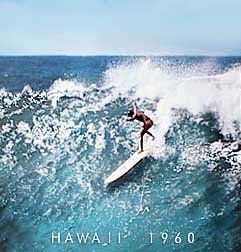 Good times.
Uh huh, and then next it was time to go see our friends me and my arrow play at the Che Cafe. They were SO cute and good! The Mrs. and I were really proud. 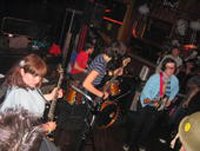 These kids really know how to write good songs, and then sing and play them, too. The kids of today give me hope for tomorrow.
*Cautionary note to anyone over 26: don't attempt to drink many Pabst Blue Ribbons with the chil'rens if you are sunburnt & tired after surfing for 3 hours. It is possible that the for the next 24 hours you will be unable to do anything except waddle to the farmer's market 2 blocks away, take a nap, meet the chil'rens for lunch, take another nap, wake up for dinner, walk along beach at poignant sunset with The Mrs., nap again.

Up first:
a debut from flow bee. This piece was recently birthed at a weekend workshop given by the Gaylord Rehabilitation Center.

smudge womyn on the mountain

smudge womyn on the river

you take with your clippers

and you are a giver

give us the peace and communy


Next up is Sea Monkey:


Here's what's on tv:
The Things We Do For Love: A Paralized Woman
Thanks Her Ski Instructor. 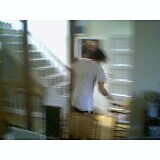 This series is titled "A DJ Preparer to Spin the Platters Later in the Eventide." 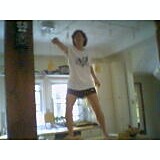 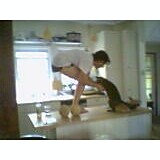 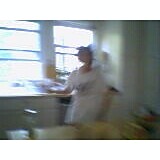 reporting from the field.
The entire staff of The Gaylord Center is currently on a research trip in New Mexico, rightfully maintaining their reputation as out standing in their field.
Gree C. Hair has taken the oppurtunity to step up her photojournalistic efforts.
Shown here is "Trash Can." 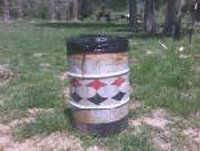 
Dick Blue and I spent the day in Palm Springs yesterday.
I could sit around and talk about the natural wonders of the desert, the intense heat, the cultural phenoms of hillbilly trailers, gaudy gay Hollywood getaway spots, UFO's and aliens, sacred Native American land, early and mid-century modern architecture and furnishings, the politics of water and irrigation, the Dinah Shore lesbian golf tournament, Bob Hope, date farms, and the Aerial Tramway, among other things.
But what most excites my imagination there is a thrift store run by the.......

World-famous longboard surf spot.
It's even in the dumb Beach Boys song.

Named for Saint Onuphrius, the "Bearded Lady" saint. She started out as a young girl who was being dogged by a choad she didn't want, a choad her parents "gave" her to in marriage because he had dollars. The night before the wedding she prayed hardcore and awoke with a full beard, which was revealed when the choad lifted her veil. He ran away, and she went on spend her life in the desert in Egypt, eating dates and hearts of palm. Her hair grew so long that it was her only clothing, other than a leafy thing for her bathing suit area.

She is usually depicted and spoken of as a man, a girl who became a man, but once in a while somebody will say that she remained a lady who had an enormous beard. Of course I can't find my picture of her as a lady with a lady body and a full beard. She's shown like that on a fresco in an early church in a cave in southern Turkey. 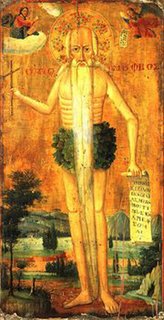 This one's for dubz 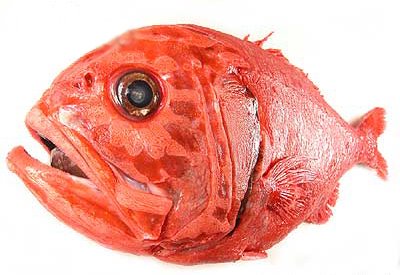 "Am I giving myself irreparable skin damage?"

It's a little worrisome to be so pale-skinned and to be out there on basically a giant mirror called the Pacific Ocean.
Some people get nicely darker. They look summery and healthy. The rest of us get pink, then red, then spotted, then leathery orange. Kinda rough. Kinda orange roughy. 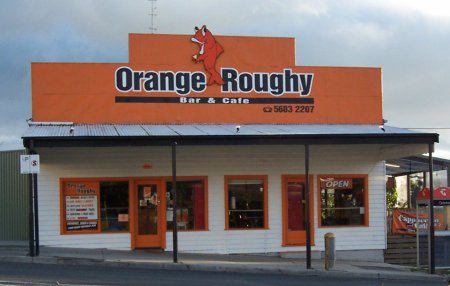 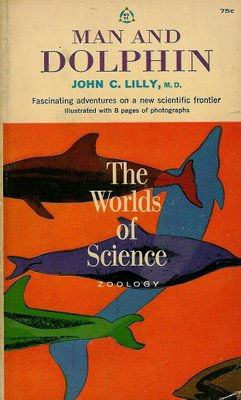 While sitting on my board, utterly spaced out & tired between sets, two dolphins suddenly arched up out of the water and blew out their blow holes. PHHHHHH! Like 6 feet in front of me. Out of nowhere. Startled the shit out of me, but so worth it because beautiful.

My leash got busted, but I decided to paddle all the way far outside, where in a way the stakes are higher without one. Felt naked and nervous without it, because I'm still such a spaz, and there are often situations where I end up relying upon it. My old time surfer friend Sad Bob Schuster told me it's better to surf without one, it makes you a better surfer, and they are a burden anyway. Turns out he was right; I learned a lot yesterday. I actually did become a better surfer in one day. Plus there was nothing to hog tie me or to get tangled in the kelp. So liberating. But you can't be sloppy without a leash, you really have to be heads up and not lose your board. That's the part where becoming a better surfer happens.
The second time I lost my board was a tiny bit harsh. I'd been going for medium & smaller waves so I could get the hang of keeping control of my board when kicking out, etc. at the end of the ride. I started feeling pretty good about things at just around the time when a big & beautiful wave came up, and with no one around me I decided to go for it. It was a right, which is harder for a goofyfoot spaz like me, but I made it and I felt like a tremendous big shot. Right up until halfway down the drop, when at high speed I hit a thick patch of kelp. My fins snagged on it and jerked my board to a bitter halt, catapulting me head first like Greg Louganis but without any of the grace. Sure, I was fine and just dove under, but that big & beautiful wave took my board ALL the way in to the beach. And I was far out there.
After that long & inconvenient swim to shore, at the end of a two hour surf session, I was tired and slightly dizzy. Of course my board had washed up on to the rocky part of the beach. But no dings! What luck. After carefully inspecting the board, I triumphantly and tiredly tucked it under my arm to begin the trudge down the beach, and that's when it slipped and I dropped it, right on to a rock. Significant ding on the rail. Fuck YOU!
Turned out ok though. The wax on my board was old and filthy, and my board pride had been a little in the toilet. I'd been meaning to clean it for quite some time now, anyway. So I made the afternoon all about repairing and rewaxing my beautiful board, and now everyone's a winner. 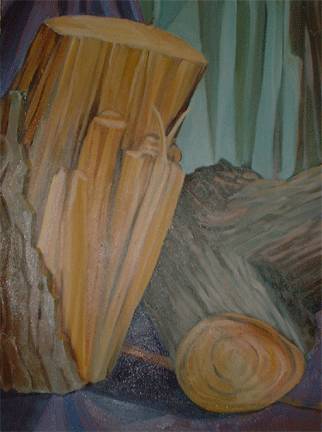 Subject: A long day's journey into the waves


Object: Seeing through the eye of the tiger

Oh my god, I finally got out there today. Van brakes went out, so I had to search around all morning for the strap-on roof rack for the car. No finding. Anger feelings. Then drive clear across town to friend's house who has convertible, switch cars. Then go back home to van to get board and stuff. Then drive out to Tourmaline, but run out of gas on the way (all dashboard things broken, no way of knowing, except for repeated intuitional messages that I kept ignoring. (*note to self: why do you still do that?)
Roll the car into parking spot. More anger feelings. By now the mysterious, poetic, soft grey stillness of morning has burned off. The sun mocks me. A parade of choads and choadettes passes me by, carrying their coolers toward the beach. Sweating, cursing, trying to stay calm, I discover a small gas can in the back. With gas in it! Like a cup. But it is enough to start the little old VW Rabbit and get me to the gas station. Gratitude kicks in. I realize I'm shallow, in that when things go my way, I have happy feelings. Whatever, though. Miraculously, I find a spot in the parking lot really quickly. There are thousands of choads on the beach today, literally, yet this happened. More gratitude, more happy. Then the unthinkable happens.....there are not that many people in the water. How could this be, on a sunny 4th of July in San Diego, when the ocean is warm like bath water? Because they all seem to be flopped out on the beach, drunk. Tossing horse shoes. It's their day off. I can't blame them. I can only thank them for staying out of my way, thus enabling me to catch about 10 billion nice waves without having to fight for them or get cut off trying.
The only sad thing was that as I was sitting there, spacing out on my board between sets, I heard a voice in the distance calling what I thought was my name. I thought for a second that it sounded like Sea Monkey.
This Team ain't no Team without you, Sea Monkey. 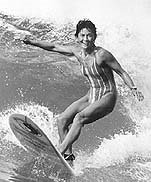 Red wine will cut you. With a dull, achey knife 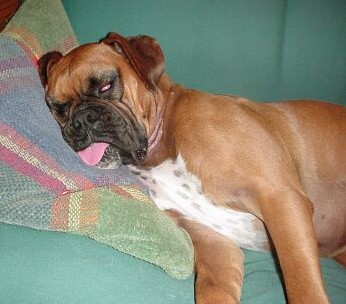 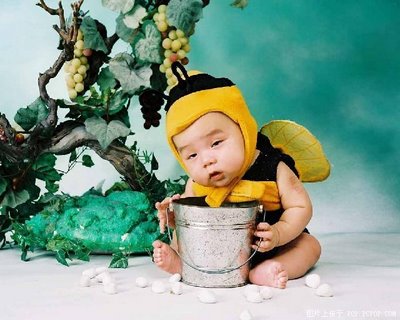 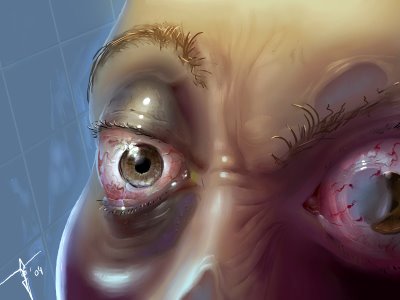