A Reply to Corny

The Mrs. has a CD of Florence Foster Jenkins, who was a loaded socialite who loved to sing. She'd give recitals that the climbers and brown nosers would feel trapped into attending, and she made a series of recordings of herself to give as gifts.
Here is Mme. Foster Jenkins styling her rendition of Mozart's "Queen of the Night." 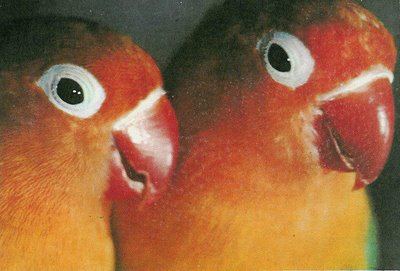 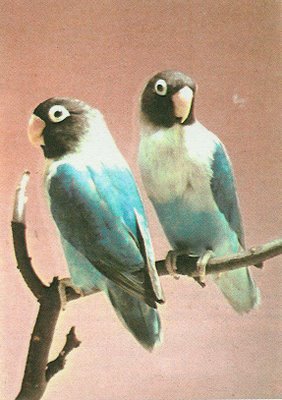 We'd hate to tell you we told you so

because that would be embarassing for you. 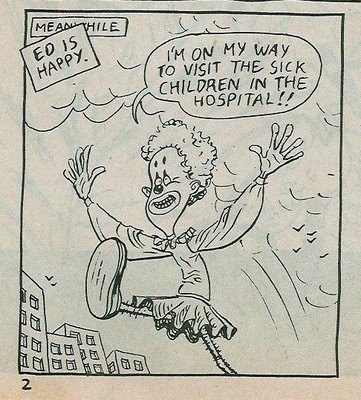 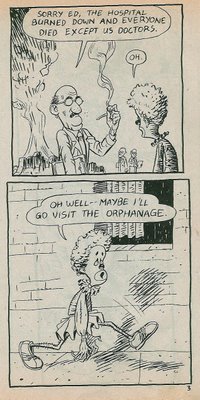 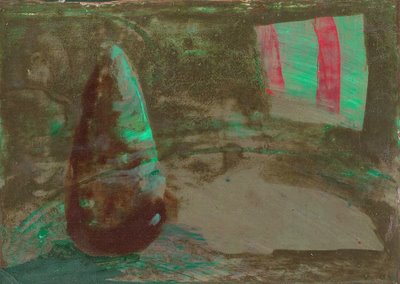 The desk of Team Shredder has just received the following report from gree c, accompanied by this beautiful image by Lizzie Bonaventura, called, "Christmas Tree vs. Television."


And now, the report:

Cuddles could hear his sister Daisy call him.

“Cuddles, Cuddles, help me! Cuddles help me!”
Cuddles was very tired and hungry from playing all night. He had to go home and tell them what had happened to Daisy. Cuddles’ mother was very worried about Daisy and where she was.
Cuddles started down the road to find Daisy. He came to a river that he couldn’t cross. Cuddles saw a log floating down the river and jumped on it to get across the river, only to find out that the log was headed right toward a waterfall. Faster and faster the log was moving down the river. The log was getting closer and closer to the waterfall. All Cuddles could think about was how his sister was and that his mom was so worried about her.
The log was moving faster and faster down the river. About five feet from the waterfall, a rock in the river stopped the log. More logs were coming down the river and getting stopped by the rock. Finally, Cuddles could get across the river.
Then out from a log came Zipper the fly. Zipper almost knocked Cuddles over the log.
Cuddles said, “Wait. Who are you?”
“I am Zipper the fly. Zip, zip, zip, that’s who I am, Zipper the fly.”
Cuddles asked Zipper, “Have you seen my sister Daisy. A big crow has carried her away and I must find her.”
Zipper replied, “No, no, no, no I haven’t. But I will help you find her!”

A Boozer, a User, and a Loser 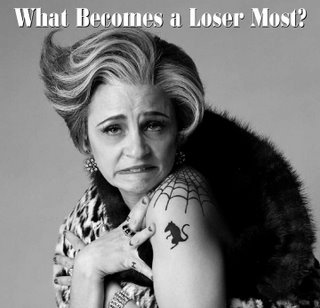 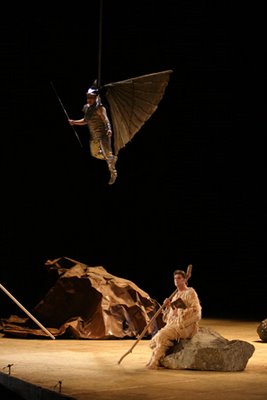 The Coronation of Poppea, Los Angeles Opera.
The Mrs. and I went to this the other night with Eileen Myles, Ron Athey, Suzanne Matheson, and her friend Margaret. I just have to say that it was a beautiful show.

<---Here's Mercury, coming down to tell us something about something.

I thought Mezzo-soprano Susan Graham kicked twice the butt of everyone as Poppea. She was super expressive & nuanced, and did some beautiful interpretations in my humble opinion. Frederica von Stade did a great job with Ottavia's final banishment aria. Hearts were broken. And after she got warmed up, Christine Brandes came out really strong as Drusilla. Ms. Brandes happened to have studied with the same teacher as Mrs. The Capt'n. The music world she is small. Countertenor David Daniels was also very expressive as Ottone. Kurt Streit seemed confident as Nero, but a little flavorless I thought, plus why did they cast a tenor and not a countertenor in that role? It was weird. Bass Reinhard Hagen was good as Seneca. He had a nice warm sound, not too much like a tuba.
The LA Opera site has clips to listen to. I'd suggest Pur ti miro, the incredibly beautiful final love duet. It's a killer, and there was not a dry eye in the house.
Here is a cute email that The Mrs. wrote and sent around to us before the show, to get us all excited and stuff, and which totally worked: 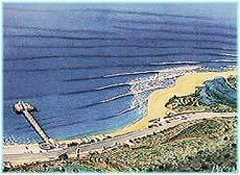 I was nervous going out there. I mean it's the 'Bu, a world-class, world-famous spot, often crowded with highly talented & famous surfers. What right does a kook like me have to be out there, getting in people's way, doing dumb shit and ruining people's waves, not on purpose but because I'm a spaz who can barely control her board. I told myself I'd just watch from the beach at first, or if I even went in the water, I'd hang out over to the side and watch from there, hoping to eventually pick up a sloppy second after all the famous surfers flew by on their famous, world-class waves. And then hope to not get yelled at or coldly vibed out for doing so.
But my very first time surfing in LA turned out to be eye of the tiger. I'd driven up the PCH and along the way both Sunset and Topanga looked good, but somewhat crowded. I couldn't believe I was going to Malibu, and I couldn't tell whether I was more excited or more nervous. The deal breaker was when I saw that there weren't that many people out. The board came right out of the van and the clothes came right off of the booty.
The people there looked like the surfers you see in the magazines, it was funny. Almost half were women, a very good sign. Some even smiled, nodded or said hi. So much for my assumptions. Most of them were hanging in the middle/inside areas, so I decided to paddle out past them to the outside to sit and wait and watch. Oh my god, the way the waves peeled off of the point! It was incredible. And there was room out there, too. Room for even me. Within a few minutes, something told me to just go, so I went. An hour and a half later, I'd had the longest waves I'd ever had. 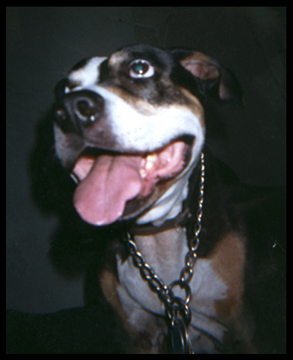 Photo: Andrea Lawlor
Rosie, 1990-2006. Soul of a poet; soulful, extrordinary so-called dog; companion to Eileen Myles for 16 1/2 years; friend to many others. We already miss you, friend. RIP.

We just love the Dutch here at Team Shredder 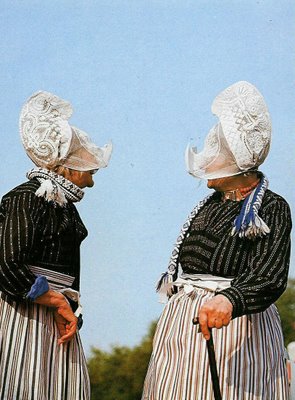 20 miles west of Santa Barbara on highway 101.
This doesn't look like much here but yesterday this place LIT UP in the big NW swell. A little surprising to me since this is a south facing break, but whatever, it was fun as all getout. Made the trip with B. Williams & we met up with her friend Gay Mike there. We'd intended to go to like Ventura, but it wasn't happening much, and Rincon looked crazy, and Mike talked B. Williams into it and B. Williams talked me into it. Not what I'd bargained for, driving 4 hours RT on my day off from commuting from San Diego, but well worth it. Got to discover a beautiful spot after a beautiful drive, got to surf with Mike who is great, plus it's always good to have the gay out on the waves. Mike's from up there and he said it normally doesn't really break at Refugio, but because of the particular conditions, which included a great offshore wind, it was rare chance at the spectacular. Cute B. Williams and her cute dog Wolfgang played on the beach, Mike rode the more knarly beach break on his tiny fish because homie has been surfing his whole life, and after falling several times for no reason, The Capt'n here picked up some big-ass right bombs outside at the point. Eye of the tiger. 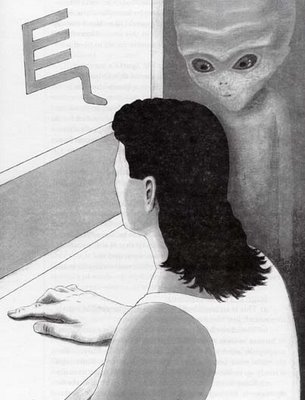 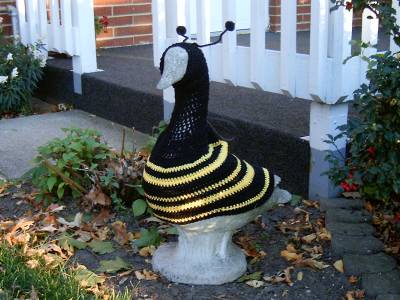 Ali Liebegott and Robin Coste Lewis' I Have an Extra Rooster

As everyone knows, I hate nothing more than bragging, but there is a big swell in right now, and I happened to have kicked some deffinite butt today. Not too bad for a spastic kook. 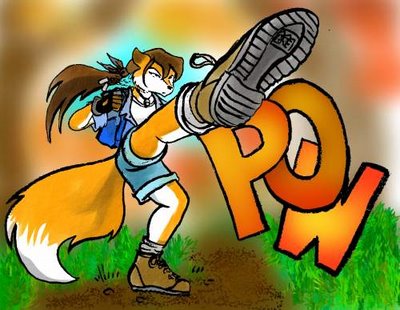 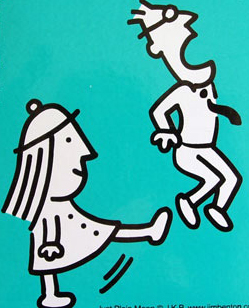 A response to Zoe Strauss 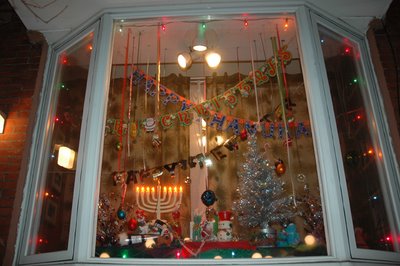 Here is Zoe Strauss and Lynn Bloom's front window.
It is correct in every way.
Now I must respond to her list of most of the places she's lived with a list of every place I've ever lived, in chronological order: 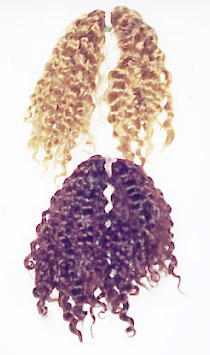 
Waddled down hill to cafe for etherwaves. New housing unit does not yet transmit. Another shade of limbo, which would be not un-alright were it not for the high-energy choad barrista guy who was not singing but song styling along full blast with Boz Scaggs' "Lido." My soul would have died had it still been alive to hear it.
Boxes everywhere, the to do list grows longer and the done list is a lie I tell myself to retain the curl.
"It's all good," the barrista choad would probably say, and at this point I'd have to agree. Ungrounded, nervous, and exhausted still, yet happy somewhere up in here where "The Self" once lived.

Sea Monkey's in the Mood For Luv

Alicia McCarthy at Jack Hanley Los Angeles.
Technically the show is over, but certain members of the Just Because Department of Team Shredder were fortunate enough to catch a peek when they were taken to Chinatown by our dear friend Brenna "Rage" Williams. Not only did we get our noodle on, but even better, B. Williams pointed us toward the beautiful installation by Alicia McCarthy, master of the delicate lines and shapes. 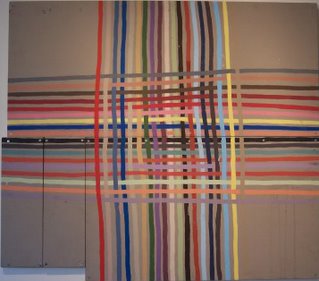 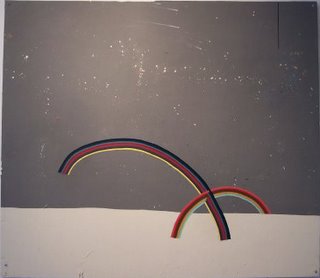 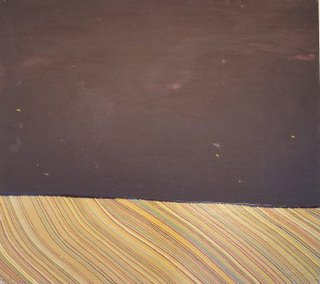