Fuckheads: Portraiture for the Silicon Enlightenment 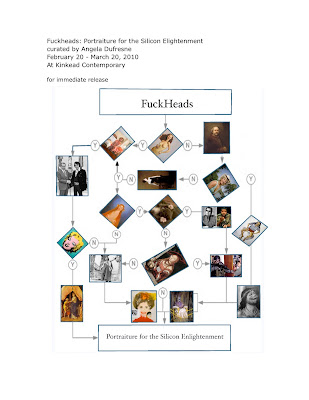 Artists haven't been weighted by the responsibility to describe likeness, physical or metaphorical, in portraiture for much of the 20th century and any historical tendencies toward sentimentality that remained in the last century have been thoroughly decimated by the 21st century's anarchy of silicon intelligence. "Fuckheads" celebrates this new, unabridged democracy of images - a re-presentation of identity; linking status, indentification or appearance to a greater global context, whilst also paying homage (affectionately or not) to the individuals represented. Fueled by a deluge of information, the artists in this exhibition further expose the mechanisms of outward appearance and social identity resulting not in static, crystallized renderings, but moving amorphous things orbiting between two points; fact or "real" social identity or "virtual" new, hybrid entities. "Fuckheads" depicts personal or appropriated subjects, made from observations or memory and each of these artists have gained perspective that could only have been bred from the free flow of media that defines us today.