Who let the dogs out 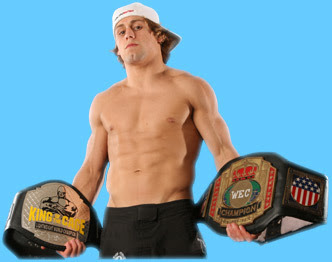 Urijah Faber, aka "The California Kid," has brought it again, defeating Jens Pulver for the second time last night at the San Diego Sports Arena. This puts his record at 22-2. Okay? 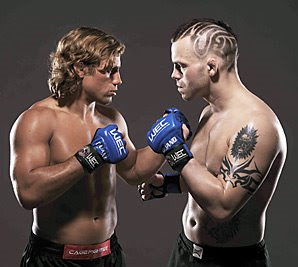 We didn't see how empty our little lives were till last night, when we experienced for the first time the extreme world of live mixed martial arts/cage fighting. Holy smokes. The audience was a sea of choad with scattered strippers and a few rocker moms, ALL OF WHOM went wild when Urijah came out into the arena. We were like whoa, he is completely a superstar in the world of cage fighting. Dick Blu immediately started freaking out with worry over cousin Urijah's safety, but he totally kicked butt like some sort of ninja, and it was all over in under 2 minutes. Turns out the world's sweetest guy in real life is a killer in the cage. At 5'6" and 145 lbs., he may not be large, but he is evidently in charge.


I nearly died of shock when I went out to two events in one weekend, the other one being the Thorns of Life show in Long Beach.

This was my favorite song: