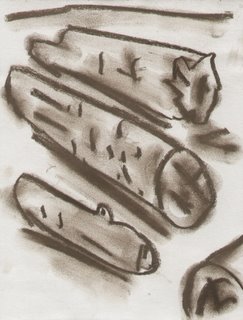 Who am I? I have not really surfed in 2 weeks. I surfed once last week, and once the week before. This is a crisis situation for somebody who has been going every day since this summer. But my back went out that day, two weeks ago, and being the responsible Capt'n that I am, I knew to get out of the water while I could still walk. I stayed out for a week, saw my chiropractor, and concentrated on packing up the headquaters of Team Shredder, figuring it was just as well. I tried again a week later, thinking I was fine, but the old back started acting up again. Too bad, too, because I almost got barrelled that day.
After a second week's break, I finally thought I had my chance yesterday. But we'd had a heavy rain and all of the dookey of San Diego ran off the streets and out into our ocean. Thwarted again!
Thus I am but a shell of my former self.

We done did it 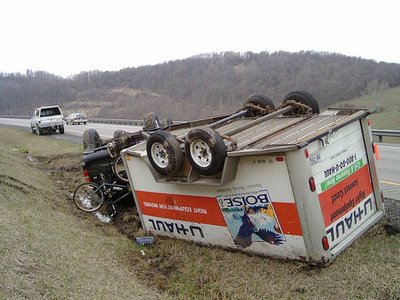 We are literal U-Haul lesbians now. Although after this much time, it's not like we're jumping into anything hastily. And no, we didn't crash the truck. It's a poetic metaphor for how fucked out everybody is feeling after moving a mountain. And the funny thing is, we still have a few more stray things to go. Yeah, I'm cracking up.

Special thanks must be given to
me and my arrow, plus their friend Shaggy,
a great band from San Francisco and one of the nicest bunch of kids around.
These chil'rens played a show and then came over to the new house the next morning
just in time to unload our large u-haul. In like 5 seconds they had the whole thing empty, I was like, whoa, oh to be 25 ish again. 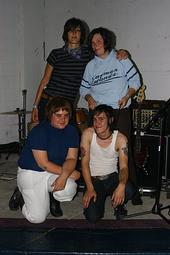 Anyway, yeah, not to keep harping on it, but moving is a bitch. 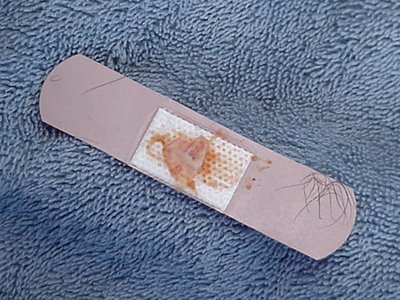 
Daisy and Cuddles lived in a woodpile by a garden with their mother cockroach.
One day, Daisy woke up and went looking for her brother. She ran through the tomato patch, down the green beans, and up the corn stalk. From here she could see everything in the garden. She could see Cuddles walking up the hill towards the house.
Daisy ran down the corn stalk to catch up with Cuddles. He persuaded her to come to the house with him. He had been there before and had so much fun.
They came to the house where they found a hole that they could get through. They crept into the hole and fell to the floor. Daisy and Cuddles ran across the floor, around a chair, to a table and up to the top. There they found a cake and started to eat it. Daisy never had eaten cake before and ate way too much. She could barely move.
From an open window in the hallway, a big crow came flying in. The wind from his wings knocked Daisy and Cuddles off the table. Cuddles landed in a crack on the floor. Daisy, on the other hand, landed on the crow’s wing.
The big crow flew back out of the window with Daisy on him. Cuddles climbed out of the crack and noticed that his sister was gone. He knew then that he must make a long journey to find her.

OK, weirdos, whatever you say.

Kraftwerk, We Are The Robots. This is my cure for too many travel emotions. 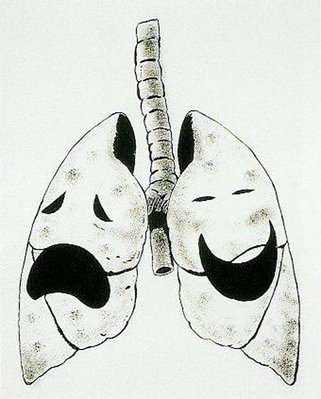 Once upon a time in a land far away, The Mrs. and I saw a store called "Travel Emotions."
It felt like a Symbol. Finally somebody got it right and reflected back to us the fact that change is bad.
Finally somebody had the guts to tell the truth, and that is, moving is just plain A Bitch.
But the bitch part is not forever, and then I'll get fascinating again one day.

To The Peoples of New York:

There is a great thing happening, and that is the Odyssey world premiere/release party at MIX NYC, Sunday November 12th, at 8PM, at 3LD Art & Technology Center.
Please click on this link to get the full explanation, as I have not yet had enough caffiene to do anything right:
http://redbirdfilms.com/odyssey.html

I will tell you this, however.
Among the brilliant, all-star list of contributors you will find FIVE count them FIVE bloggers: gree c. hair, Zoe Strauss, Sea Monkey, Mrs. The Capt'n aka Dick Blew, and The Capt'n.
You no longer have to just picture in your mind's eye our films and videos, you can now go see them up on the big screen.


Special props and thanks must go to Bernadine Mellis and Andrea Lawlor, the creators/curators of the Odyssey.


1.) The election. Never have I felt such a sense of excitement and hope from mainstream politics, ever, in my ENTIRE life.

2.) The Mrs. and I scored a big, cheap, perfect place to live in LA. A whole house with a back yard and everything.

3.) I have the day off tomorrow, and look what's coming:

A lullabye for Sea Monkey while she sleeps it off...

How I Feel Watching Boston Legal with Dick & The Cap'n

and Sheldon on The Couch

SeaMonkee69 is mysteriously only able to express her fillins these days through songs originally hits in Heaven. Special thanks to Li'l Rob for the inspiration. 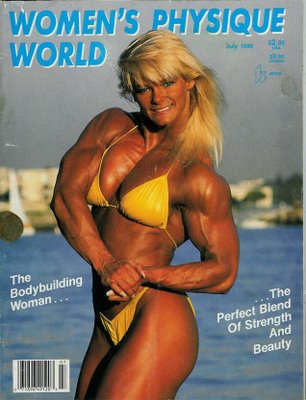 No pun intended there, just being literal. I started out as kind of a pack rat, but then prided myself on getting a lot more minimal, only to be sabotaged by my brother who started shipping me tons of my old crap from our parent's old house where he now lives, literally by the trunk load. That would be ok if I had a big place, but I don't. I live in 3 rooms with a whole other person and a cat with a big personality.
Now that we are moving very soon, I am faced with even more terrible decisions about what to keep and what to toss.
Do I really need this?---> 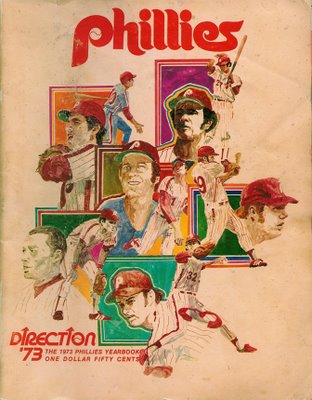